Abbey Trádún and the Citadel 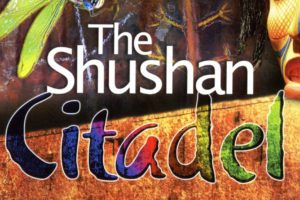 Here, as promised, is our second glimpse into The Shushan Citadel, this time visiting an island abbey outside the citadel walls.

Brother Joachim waited patiently at his workstation in the safe.talk room abutting the North Novitiate Cloister at Abbey Trádún [Thraw-doon]. It was 0859 on a Thursday morning, one minute before he would hear from the Citadel. His contact would be Meres, who had begun communicating with him through space.speak a month ago, and now continued this weekly. He seemed genuine enough, and had openly introduced himself as an anti-terrorism expert with the Omni Development and Protection Corps.

At the dot of 0900 hours, words formed on the monitor before him.

“Punctual as always, my friend,” typed Brother Joachim. “How are things at Citadel?”

“Just fine. No doubt you’ve been up for hours already.”

Liturgy of the Hours

“Only since 0530. It’s not like the old days when monks prayed every three hours around the clock.”

“When did they sleep?”

“Whenever they could between prayer and work.”

“How big a place do you have?” asked Meres.

“We’re quite small actually. There’s only a couple of hundred of us all told.”

“Are people living there who aren’t monks or nuns?”

“Oh, yes. Only forty-two of us are professed religious, plus we have ten postulants and nine novices studying our Rule in order to some day become professed. Then there are nineteen associates including a priest and his wife.”

“Associates are people who follow our way of life without taking our sacred vows. Religious are monks and nuns who become professed by taking solemn vows after experiencing our lifestyle for a time and completing their studies and training. We follow a Rule, or way of life, and don’t marry, preferring to serve God in our celibate state.”

“I suppose that gives you more time for prayer,” said Meres, trying to comprehend the strangeness of monastery living.

“It does. Also more focused energy to follow Jesus through service to humanity,” said Brother Joachim, knowing that his correspondent could not begin to absorb the complexity of his words.

“Who makes up rest of your population?”

“There are a hundred students who were boarding at abbey school, and who now, of course, have no parents. And a group of priests who had just arrived for a ten-day retreat,” explained Joachim.

“Just like our college students and tourists who are now stuck with us indefinitely,” typed Meres. “How old are your students?”

“They range in age from ten to eighteen.”

“I’m curious how you survived the Desolation,” said Meres.

“Shushan is permanently underground, but I understand that the abbey was designed to go up and down depending on perceived risk of terrorist attack. Why did you go underground that particular night?”

“Why do you want to know about us?” asked the monk.

“In the capacity of anti-terrorism expert with the Omni Development and Protection Corps?”

“Yes. But I also want to be your friend. We should be allies.”

“Is Ahasuerus angry because we didn’t have him over for tea?”

“And if you could broker a visit for him it would add to your prestige,” noted Joachim.

“Of course,” admitted the ODPC man. 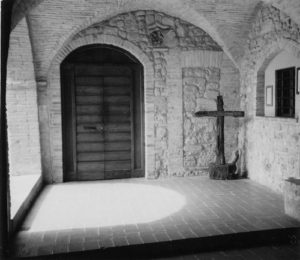 “We open our doors only to those who wish to enhance spirituality in our prayerful environment.”

“I understand. As I asked you earlier, what saved you from the Desolation when you mostly live above ground?”

“Our patron saint. It was his feast day,” said Joachim.

“October 22, the day of the Desolation happens to be the feast day of St. Peter of Alcantara to whom Abbey Trádún is dedicated.”

“And that’s what saved you?” asked an incredulous Meres.

“Yes. The evening before Peter’s special day, we were in the basilica chanting Vespers. Suddenly, the novice on duty in the infirmary interrupted our prayer. She rushed into the basilica to tell us that Sister Scholastica had an urgent message. Since most of us present knew that Scholastica had neither moved nor spoken since being incapacitated by a cerebral haemorrhage three years earlier, we listened.”

“And what did Sister Scholastica have to say?” inquired Meres.

“She said we had to get all the people and animals inside as quickly as possible and lower the abbey.”

Abbess Brigit at her desk

“Yes. Thank God, Mother Abbess ordered us to proceed speedily. Then we finished our Evening Prayer underground, and went to bed. As you know, by 0200 hours on the 22 October, our planet was demolished. But we were all safely abed underground, including the hermit monks who would normally have returned to the hermitage for the night. It was the feast day of St. Peter of Alcantara,” finished the monk.

“And Sister Scholastica?” asked Meres. “Did she speak again?”

“Indeed! But it was in heaven. She died that night while most of us slept. She would have been ninety-nine in another week.”

There was a pause while the man from Shushan regained his composure. “By the way, how do you pronounce your abbey’s name?” he finally asked.

“Thraw-doon,” spelled out Joachim on his computer. “That’s Irish for beach.” To himself he added, Fort Beach, that is.

“May I talk with you again next Thursday?” asked Meres, concluding the conversation.

“I look forward to it,” said the monk.

As Brother Joachim closed his workstation in the monks’ cloisters on the north side of the basilica, Sister Thea hummed to herself while collecting herbs for the infirmary in the tranquility of the courtyard.

The cowl of Thea’s brown summer habit was thrown back, revealing short black curls. Her dress had blue bands at the hems of sleeve and skirt, separating brown cotton from coffee-coloured skin. It fell to just above bare sandaled feet. Over this, the nun wore a sleeveless grey tunic embroidered in blue with a small cross forming the Latin words, Quod Minimus Mihi Fecisti, the words of Jesus Christ: Whatsoever you do for lowliest, you do unto me. In circle around the cross was the order’s name, Order of the Brothers and Sisters of Compassion.

Each nun’s basic wardrobe included three summer dresses, six tunics, and three long-sleeved winter dresses. On special occasions, she wore a dress habit of brown wool-silk banded at wrist and hem with blue velvet and adorned with a silver cross pendant. Thea also had two sweaters, a summer cape and a winter cloak, all in dark brown. She wasn’t allowed leisurewear in various colours because these were not considered part of her habit.

Men in the order had grey denim pants and brown cotton shirts embroidered with the prescribed blue emblem. This basic under-habit could be worn with or without a cowled brown robe. Robes came in summer weight and winter weight. They were worn with a heavy silver cross and chain.

Monks and nuns wore plain silver bands on the ring fingers of their left hands signifying sacred oaths of poverty, chastity and obedience to God. Left index fingers were encircled with silver rosary rings, each with ten Hail Mary bumps and a flattened cross for the Our Father and Glory Be.

Associates dressed in denim skirts or pants with brown shirts or tunics. All members of the order wore sandals over bare feet, reserving socks and boots for traversing mud or snow.

While Sister Thea collected herbs, she reflected that it seemed almost sinful to feel so happy after all that had happened. Yet here she was on a lovely summer day out in the fresh air in the most beautiful place on earth. Mother Abbess called the abbey an oasis of serenity in a wilderness of fear and uncertainty. That it surely was.

Abbey Trádún was a double monastery, meaning it had both nuns and monks. The semicircular apse of the beautiful stone basilica faced east in the traditional way. Attached to the basilica’s north side were four rectangular cloisters with enclosed gardens, three for monks and one for retreatants and guests. On the south side were two cloisters for nuns, one for families and one for students. All of this was designed to sink into the rock vaults blasted into the earth, leaving only its roofs flush with the surrounding terrain. A large courtyard on the abbey’s west side was surrounded by a high stone wall which continued around the abbey forming a protective ring.

Built into the northeast section of the inner wall was a hermitage consisting of three separated huts fronted by private walled gardens. Any monk could apply for a period of seclusion and prayer in the hermitage. Hermitage huts were never vacant. Two turned over regularly with different monks welcoming sabbaticals of a few months or a year to silently communicate with God and their inner beings. The third hut had been occupied by Brother Tadhg for several years.

“I am a hermit,” he informed the community when they inquired about his extended stay. They accepted that, and thereafter he was left undisturbed.

A serene moment at the abbey

Hermits joined the community each morning at 0600 hours to chant Matins and participate in Mass. On the way back to the solitude of his hut, each hermit silently retrieved his daily food rations from the monastery kitchen. He remained alone throughout the day until communal Vespers at 1900 hours, after which he retired for night. Once a week, hermits visited the monastery library to select material for meditation and for scripture reflection known as Lectio Devina.

The courtyard also contained several small outbuildings along with benches and trellises dispersed along paths that wandered leisurely through the abbey gardens. Irrigation was automatically controlled by a system that drew water from Georgian Bay as soil conditions demanded.

Beneath the courtyard, eco-rooms housed animals and growing plants. A secret maze of tunnels, conference rooms and vehicle hangars led underground from the abbey to the waters of Georgian Bay lapping at the island’s shores. Before the Desolation, government intelligence meetings were conducted here with personnel from the Canadian Military, the Ministry of First Nations, Abbey Trádún and DúndirkaNoka. The government arranged that both underground communities have sophisticated security systems and secret military forces in order to function jointly as a highly secretive Intelligence Mission. To outsiders, unaware of the covert activities, an alignment between the centres seemed innocuously natural because of their shared esteem for creation.

But there were no longer Ministries or Governments. The monastery and Noka had become islands in an inhospitable wilderness. Sister Thea shivered as she glanced to the southwest, where four hundred kilometres away the sinister towers of the Citadel cast long shadows across the land. She picked up her basket of herbs preparing to return to the infirmary.