Diane:           I understand you wrote Black Springs Abbey for the 150th Anniversary of Oil Springs. Were you invited to do so?

Mrs. P-V:      Yes. I was giving a reading of The Bells of Prosper Station at the Oil Museum of Canada and mentioned that I was considering a sequel set in Oil Springs. The audience told me I had to have it done for their 150th anniversary the following year.

Mrs. P-V:      The best. So I had to speed up my research on the village which I was calling Black Springs – a compilation of its former name, Black Creek, and its present one, Oil Springs.

Mrs. P-V:      Inspiration and imagination. I picture it on the outskirts of the village, back from the road, hidden by trees. The property still has a few working pump jacks along with some abandoned storage tanks…

Diane:           I’m envisioning it right now.  Did you know much about pump jacks and storage tanks when you started writing?

Mrs. P-V:      Later, Charlie Fairbank took me around his amazing property, Fairbank Fields, while discussing the history and production of oil and his personal interest in conservation. He patiently humoured my obsession with underground storage tanks by showing me holding tanks and separating tanks with all their pipes and connectors. 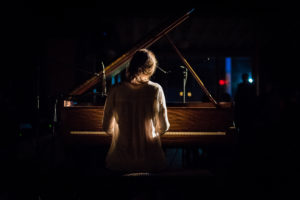 Diane:           It was worth it, Mrs. P-V, because the details make the story authentic as well as suspenseful and eerie. I also liked the touches of romance and the realistic depiction of Hilma’s struggles to overcome the aftermath of addiction.

Mrs. P-V:      Thanks, Diane. Come have a preview of the book trailer for Hallowmas II: Black Springs Abbey. I hope it makes new readers anxious to read this entertaining book.