In Part I of ‘Building Fictional Worlds’, I briefly shared the creation of two science fiction worlds. This month, I’ll take you behind the scenes of two literary fiction works to demonstrate how one writer, me, created story environments. 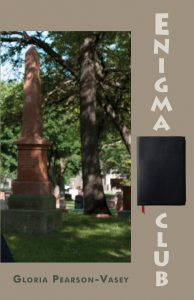 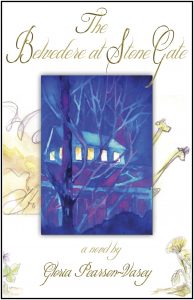 Part II: The Everyday World of Literary Fiction in The Belvedere at Stone Gate and Enigma Club
Building a world for literary fiction often involves casting an imaginative eye upon an existing milieu and its occupants. The milieu can be as large as the earth or as small as a room, while the focus is on the occupants or characters who inhabit it. The plot is also secondary to the characters.
Okay, so characters rule in literary fiction. There seems to be general agreement that other genres can sometimes wear the literary mantle.
When I set out to write The Belvedere at Stone Gate, I was not thinking about genre. My intent was to tell an interesting story conveying a realistic picture of a family whose one member had autism.
Enigma Club was written later. Here a creative writing class journals about teenage angst while acquiring better understanding of themselves and each other. 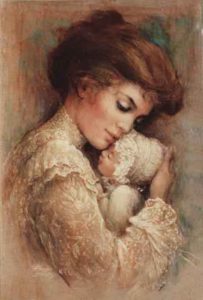 The Belvedere at Stone Gate: The Story
Claire, an elderly recluse, resides at Stone Gate with her middle-aged daughter. An unexpected visit from her grandson encourages the elderly woman to gradually reveal events of earlier years.
She recalls the unexplained death of her poet aunt, Riona, which leaves her autistic cousin, Jonathan, motherless and forever changes the dynamics at Stone Gate. After the arrival of the new governess, Claire finds herself strangely attracted to a presence in the belvedere. 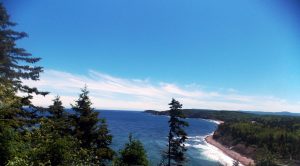 The Belvedere at Stone Gate: The Milieu
Researching the Belvedere led me on many happy day trips to the Bruce Peninsula, a region dear to my heart.
The road from Toronto meanders through the rich, rolling farmlands of Peel and Dufferin counties. Travellers on this road pass by a random mix of large and small farmsteads. In rural areas, it matters somewhat less if your neighbour of some miles away owns property more or less prosperous than your own since you only see it when you leave your own estate. There is also the occasional abandoned place, the barn blackened and leaning, its forlorn house staring out through dark, empty windows over lawns disguised by weeds and overgrown brush.
When the highway passing through County Grey enters the Bruce, wire and post fences edging the fields give way to stone, glacier boulders piled upon each other to a height of three feet and a width of two. Proceeding north, there is a predominance of expansive farms but many fields are dotted with rock piles, evidence of man’s continuing struggle to free the earth for produce. By the time Route 26 winds into the base of the peninsula, the icy blue waters of Georgian Bay have come into view. Orchis Bay, one of its inlets, is dotted with cottages and permanent homes of brick and stone, built on an incline reaching downward to the water’s beckoning edge.
Amidst the thickening groves of cedar, pine, and silver birch, an occasional log or plank dwelling nestles. Soon the ridges and bluffs of the escarpment are visible. Past the small white church, belfried schoolhouse, and tiny houses of Glencrag village, the road leads through deciduous bush and cleared, hilly pastures. Rail fences, zigzagging along their boundaries, enclose isolated, unpainted barns. A few cattle and horses are in evidence, as are some crops of hay and oats bravely competing with the rocks. 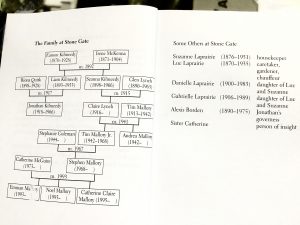 The Belvedere at Stone Gate: The Characters
It was at the suggestion of one of my Beta Readers that I drew up a family tree for the characters who people the Stone Gate estate. Of course. The equivalent of a built-from-scratch sci-fi or fantasy world in literary fiction could well be a detailed family tree. Since this is a multi-generation family saga, a family tree inserted in the book, makes it all the more tangible for the reader.
Here is the protagonist, Claire, as we first meet her:
On the fifth day of November, I ponderously ascended into the belvedere. The creaking in my joints was only somewhat muffled by the groaning of the worn oak stairs. Cobwebs clung to everything. Disturbing the dust of decades, I sat heavily on the toy box to ease my rapid breathing and pounding heart. I half expected to feel her presence there, but all I felt was a chilling emptiness that encouraged me to pull my shawl closer about me.
I had gone up there to collect my thoughts, possibly even to receive her approval. Some sign perhaps that would help me decide if my grandson should know everything that had transpired within these walls and on these grounds. And sitting there looking out on the bay through windows dirtied by time, I knew that Stephen had to be told.
In the stillness of the belvedere, I looked around at Riona’s furniture. Funny how I think of it as Riona’s when I have now lived here much longer than she did. Yet this tiny room, so full of memories, does belong to Riona. Her desk, the lamp upon it, the silent clock, her leather-adorned swivel chair, the smaller desk with its attached seat. The toy box.
Removing a tissue from inside my sleeve, I dabbed at the window, displacing strands of sticky cobwebs. The sun made half-hearted attempts to poke through, but wispy clouds collected persistently until the sky became an unremitting grey, typical of the bleakness of November. Bleak as my memories.
It was also in November, more than sixty years ago, when the first governess arrived at Stone Gate to tutor Jonathan. On the first day of that same month, I had turned twelve. And a week after my birthday, Aunt Riona and Grandpa Eamon were dead.
Perhaps I will eventually tell my grandson the whole story. But for now, I will at least let him know what transpired on this site during that November of my thirteenth year. 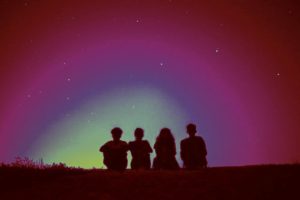 Enigma Club: The Story
Seventeen-year-old Emman Mallory fears that his twin brother, Noel, may be involved not only in drugs, but in home invasions and a teacher’s death, all of which have jolted the tranquil town of Coltsfoot.
There are eight students in Emman’s creative writing class, one of whom is classically autistic and another with Asperger syndrome. Also present in the class is an undercover agent, one of three who enrolled at Coltsfoot District High at the beginning of the fall term.
Surprising secrets are revealed through journaling projects assigned to the diverse eight who call themselves Enigma Club. 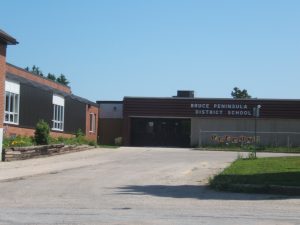 Enigma Club: The Milieu
Coltsfoot District School is modelled on Bruce Peninsula School located in Lion’s Head. The school houses students from grades Junior Kindergarten to 12. Teachers graciously gave me a tour of the school to assist my research. The following excerpts from the book provide a glimpse into Mr. Stuart’s classroom:
On the first day of school, Alexander Stuart sat bemused at a well-worn teacher desk facing sixteen empty student desks, five computer tables, and six private study carrels. Idly he read and reread the names of the students listed on the Grade 12 Register. He recognized most of the names, having known the townspeople for half of his sixty-eight years.
Three names would be foreign to the class, those of the mystery students. Alexander had been advised to treat them casually so that the class would accept the newcomers without suspicion.
… The elementary and secondary components of Coltsfoot District School had fused long before the current seniors had first entered its doors clutching their parents’ hands. Over the years, the school’s population fluctuated between 350 and 400 students. Of the 362 in this year’s crop, only 15 occupied Grade 12 seats. 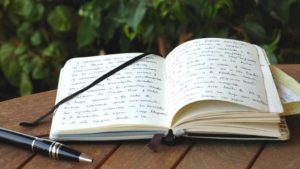 Enigma Club: The Characters
The characters in Enigma Club are largely introduced and developed through their journaling. Let’s take a peek at Margaret Baltessen’s Journal entry of November 3:
Emman is in every one of my classes so we see a lot of each other! We’re both taking French, Advanced Functions, Chemistry, Understanding Canadian Law, and of course the Writing class. In the past, he and Noel were always partners for class projects, but this year they don’t even want to share a lab desk. I almost fainted when Emman told Mr. Brown, the new chemistry teacher, that I was his lab partner.
I’ve always wanted to be a nurse practitioner. Now the challenge is to get accepted at McMaster University in Hamilton because that’s where I think Emman hopes to go. Of course, there’s no guarantee at this point that either of us will go there. Once I do get accepted, I will apply for clinical appointments at the Coltsfoot Hospital, or at the least, in nearby Orchis Bay. That way I can live at home.
Emman and I have gone to school together since kindergarten. We’ve always been friends but we’ve never gone out on a date together. At school dances, we always have at least one dance but he asks other girls to dance too, including Doris. Mom says that because our class has always been so small, we’re like one big family. She thinks it’s great. When I told her I wanted to be Emman’s girlfriend, she told me to not seem too eager or I’d frighten him off. Dad says I shouldn’t be thinking of boys in that way at all!
Why am I the most miserable person in the world?