Building a Sci-Fi World (The Shushan Citadel, The Dúns)

Every novel takes place in a designer world created in the imagination of the writer. Creating a fictional world, be the setting elaborate or simple, treacherous or safe, is an amazing experience. Some of my created worlds become so dear to my heart I find myself revisiting them.

Such is the case of The Shushan Citadel and The Dúns. I love the setting because of its three amazing subterranean havens: a citadel, an abbey and an indigenous settlement. 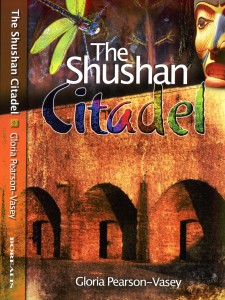 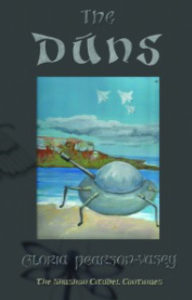 Part I: The Sci-Fi World of The Shushan Citadel and The Dúns

Prior to the Desolation, the planet experienced elevated temperatures and violent weather anomalies due to global warming. North America contributed to the situation through its outrageous waste of natural resources, unbridled consumption of food and material goods, and callous polluting of Mother Earth.

But because of its geographical positioning, the Great Lakes Region is spared the extensive drought, famine, and despair suffered elsewhere. It is therefore inevitable that less fortunate countries would cast their envious gaze upon this land of plenty, prompting the construction of underground cities in Michigan and Ontario to defy terrorism. Two of these cities, DúndirkaNoka and Abbey Trádún, seek only peace. The third, at Shushan, plots to conquer the other two. 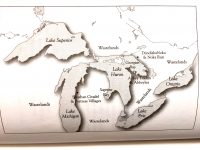 Set 1: Shushan
At the time of the Desolation, Shushan is a functional underground city laid out as two massive caverns, their walls embedded in earth’s natural rock. Pedestrian walkways, passenger tubes, air scooters, and various service vehicles join the caverns. Water is supplied by natural underground springs, energy produced by sun, wind and waste. An illusion of outdoor vastness is programmed in both caverns through wispy clouds in blue skies by day, and twinkling stars and moonlight by night. Breezes with the scents and sounds of nature add to the realism.
In the Mountain Cavern, doorways lead to shops, houses, or walled gardens. Incorporated in the layout are parks, playing fields, ornamental lakes, and an atrium shopping mart. The Hospitality Cavern, originally designed for tourism and entertainment, is comprised of villages, spas, and inns. Sites are reached via the Ride, which can be programmed to provide a serene tour or a thrill experience. Ride cars move on air currents over monorails. In thrill mode, cars splash through waterways or lift off rails to zip across lofty spans onto adjoining tracks. Village themes include Victorian Village, Old Wild West, Ghost Town, New York Chic, Greenwich Village, and Country Market.
Five years after the Desolation a fortress rises above the underground city. Within the Citadel’s formidable walls, the residence of Ahasuerus resembles a medieval castle, magnificent to behold from air and breathtaking at ground level. Its marvellous gateway is framed with slender turreted towers offset by larger polygonal towers guarding four corners of surrounding curtain wall. Massive oaken doors open into a huge entrance hall. The foyer’s curved concrete walls are pierced by narrow windows, which splash bands of stained glass colour upon polished marble floors. A circular stone staircase climbs elegantly upward toward a skylight high above. Once a visitor moves beyond the entrance hall, the medieval castle disappears and, as if by magic, a futuristic palace appears.
Guests are led into the soaring foyer where they are fitted with numbered wrist bracelets, escorted through an archway, and invited to sit in lounge chairs. The chair train then moves into an atrium, crosses a bubbling stream, and winds through pleasant gardens up a sloping path to the guest suites. The path divides, delivering women to the west wing and men to the east wing, their rooms assigned according to bracelet numbers.

Set 2: Abbey Trádún
Situated on an island, Abbey Trádún is a double monastery, meaning it has both nuns and monks. The semicircular apse of the beautiful stone basilica faces east in the traditional way. Attached to the basilica’s north side are four rectangular cloisters with enclosed gardens, three for monks and one for retreatants and guests. On the south side are two cloisters for nuns, one for families and one for students. All of this is designed to sink into rock vaults blasted into the earth, leaving only its roofs flush with the surrounding terrain. A large courtyard on the abbey’s west side is surrounded by a high stone wall which continues around the abbey forming a protective ring. Built into the northeast section of the inner wall is a hermitage.
The courtyard contains several small outbuildings along with benches and trellises dispersed along paths that wander leisurely through abbey gardens. Irrigation is automatically controlled by a system that draws water from Georgian Bay as soil conditions demand. Beneath the courtyard, eco-rooms house animals and plants. A secret maze of tunnels, conference rooms and vehicle hangars lead underground from the abbey to the waters of Georgian Bay. 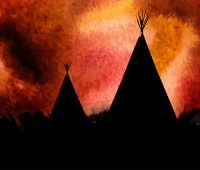 Set 3: DúndirkaNoka
When Dragonflies from the citadel fly over DúndirkaNoka, pilots observe a model of indigenous life before white settlers arrived. Conical birch bark tipis, domed wigwams, and summer lodges encircle a large central manor. Lodge coverings made from moose or deer hides, bark or brush, are arranged over a conical framework of poles. Stacked near the summer lodge are several Algonquian birchbark canoes. There are also winter lodges, semi-subterranean, wood framed, earth-covered dwellings capable of providing warmth under most extreme conditions. Propped against a winter shelter are snowshoes, toboggans, and dogsleds.
Commonly called Noka, which means Bear in Algonquian language, the settlement had been an internationally recognized centre for preservation of indigenous language and culture. Prior to the Desolation, students came from near and far to spend a week or two living above ground in the wigwam community. Invited medical personnel made annual retreats to prepare for the initiation ceremonies of first, second, third and fourth order of Midewewin, medicine man or woman.
At the entrance of the manor’s long lane are two stone bears, one threateningly upright with fierce eyes and an open mouth exposing vicious teeth. The second bear is on all fours, its gaze focused and still, its nose raised searchingly. Within the manor is a central great hall, pine walls reaching to a lofty ceiling constructed like an inverted canoe. The hall is surrounded on three sides with service rooms on lower level and bedrooms on the upper. The lower level contains learning rooms, a spirit room, eatery, food storage and preparation rooms. Circular stairs rise from two sides of the lower level to an upper balcony fronting bedrooms and overlooking the great hall. Noka’s subterranean centre is accessible only to First Nations people and a few non-natives who have earned honorary membership. In Noka’s underground city are magnificent biology facilities and university dedicated to agriculture, herbology, veterinary medicine and fine arts. Every known species of Great Lakes plant, animal, insect and aquatic life is represented in huge subterranean conservatories and farms. 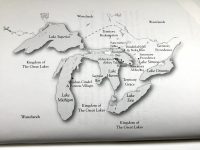 The world of The Dúns is an expansion of The Shushan Citadel world. 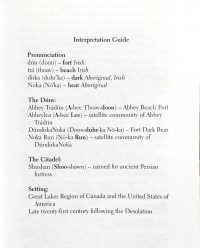 Set 4: Monastery and Indigenous Security Systems
DúndirkaNoka and Abbey Trádún are physically linked by an advanced land-water-land navigation system. Lurking in subterranean hangars, spherical vehicles known as Waterbugs speed without detection beneath the waters of Georgian Bay and thence through tunnels connected to the underground cities. When a Bug emerges from water on either side of the bay, it extends legs, enabling it to scale the embankment leading to a tunnel mouth. Even more manoeuvrable and deadly than Waterbugs are the Airbullets, prudently inactive since the Desolation. Housed in hangars adjacent to the Bugs, at both Noka and the abbey, the Bullets wait expectantly, hidden from Shushan spies and the Citadel’s fierce Dragonflies which routinely scout the Great Lakes area. Tiny solar and wind-powered spying “insects” complement the older Waterbugs and Airbullets. 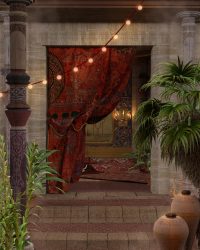 Set 5: Citadel Harems
The pueblo is a beautiful multi-level facility encircling the mountaintop of the Mountain Cavern, its fluid lines blending into the rock. Within the pueblo exist four harems, the domain of Shaashgaz, custodian of all women and children living there. Entertainers live in the first harem, women with infants under age two dwell in the third, and female nannies stay in the fourth harem to care for young boarders.
Baby makers occupy the second harem. Too beautiful to have their bodies deformed by the pregnancy process, their eggs are regularly harvested, fertilized artificially, and implanted in the women of harem three. The resulting infants are cared for by the women who give birth to them until age two. Then they’re adopted by other families. 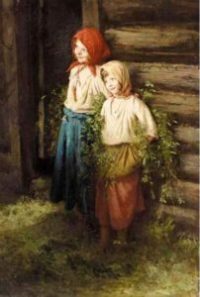 Set 6: Fortress Villages
Outside the Citadel walls, Fortress Villages are surrounded by invisi-barriers and stone walls. The villages are the homes of citizens from the subterranean city selected to become agriculturists. In return for their labour and produce, they receive protection, health care, and schooling for their children. During the busy months of planting and harvesting, youngsters from the Fortress Villages board in the pueblo under the care of nannies.

Set 7: Noka Run and Abbeylea
DúndirkaNoka and Abbey Trádún also have satellite settlements. Refugees from the Wastelands and forests, drifting away from the coarse, violent company of the Lawless, seek out the security and comfort offered by ordered civilization. Those seeking sanctuary at Noka are invited to create communities on the vast protected lands of the Indigenous nation. Other refugees wander to the eastern shores of the Bruce Peninsula where they wait patiently to be ferried to the island monastery. Hamlets encircle the abbey, the new residents interacting freely with each other and sharing resources amongst themselves.
The newcomers tend crops, construct protective barriers, and assist Noka and the Abbey in nurturing their lands back to health. Adopting the names Noka Run and Abbeylea, the satellite settlements carefully foster the existing varieties of birds, insects, fish, and animals.

Quickly now! We must leave at once before Characters from The Shushan Citadel and The Dúns find us on their sets.