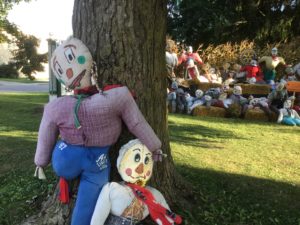 Have you visited Creekside lately? If not, you really must. Suspense lurks behind the town’s peaceful façade, and some of the people here have secrets you wouldn’t believe.

To date, the happenings at Creekside have been recorded in three books: Bells of Prosper Station, Black Springs Abbey, and soon-to-be-released Bloodline Feather. (Paperbacks available through local stores, and eBooks at Amazon, Kobo, Barnes&Noble, iBooks.)

Creekside has many beautiful Victorian buildings, one of them being the library converted from the former train station. Adults, teens and children visit the library daily, only needing wariness as Hallowmas nears. Every night in late October, families who carry the sensointuitive gene lock their doors to keep their children safe from the Hallowmas Train.

In Bells of Prosper Station (Curious Tales From Creekside, Book 1), Azur Moonstorey and her companions, Dillian Witherton and Dr. XT Barkley enter the station library just before the stroke of midnight. They know that, at that time, the library will transform into its Victorian state and the fearsome Hallowmas Train will arrive on rails no longer existing in modern Creekside.

Timeriders boarding the ghost train are transported to Creekside’s nineteenth century oil town, then called Prosper Station. From there, Azur must access the eerie dimension of Vapourlea if she’s to rescue her sister, Hilma, from the Faefume, Vek.

As well as providing friend support, Dilly hopes to bring light to an unresolved ancestral murder. XT, a neurologist researching hypersensory abilities, is naively along for the ride. You, dear reader, are invited to come along too.

Black Springs Abbey (Curious Tales From Creekside, Book 2) continues to follow the adventures of Hilma Moonstorey, her family and friends.

After her harrowing rescue from the Faefumes, Hilma is nursed back to health in Creekside by her grandmother. Although five years have passed since her return from Vapourlea, the talented young musician remains beset by anxieties and insecurities.

Encouraged by young police constable, Garth Mayfield, to take a position at a dilapidated abbey on the outskirts of nearby Black Springs, Hilma soon discovers that the abbey houses not only elderly nuns but ghosts and dark secrets.

More than historical fantasy, Black Springs Abbey is a love story and an account of the long, bumpy road from addiction to recovery.

Author Sasha Deleaney, is a carrier of the sensointuitive gene. Her nephew, Dorrian Clery, has just discovered heʼs a full-blown Senso. Together they set out in a motorhome on a book tour to the Atlantic provinces.

Early in the tour, Dorrian and Sasha realize they are being followed, and welcome the company of Professor Bartholomew Wolfe, another touring author. When the stalking continues, the teen turns to a magical bloodline feather for help.

Zhiab, guardian of the feather, is eager to help Dorrian discover and develop his unique aptitudes. But only for thirty-five days. Dorrian takes the guardianʼs warnings lightly and fails to realize the thirty-five days are slipping away.

The situation worsens as malevolent forces go to extremes to prevent Sasha and Dorrian from returning home. Zhiab repeatedly warns the boy of danger, and reminds him he is neglecting a time-limited opportunity to develop his powers.

Bloodline Feather is a story of suspense, magic and coming of age. Incidentally, the book provides an authentic road trip to the Maritime Provinces.

While you’re reading Books 1 and 2, and awaiting Book 3, I’d love you to join my new readers’ group, ‘Creekside Chats’. Once it’s set up and functioning, we can discuss the curious tales that intrigue the inhabitants of Creekside and the nearby village of Black Springs.

Oh, I almost forgot to give you a heads up, dear reader! Check Facebook, Twitter and LinkedIn for eBook promo specials between September 28 and October 1.