I’m really a lazy blogger, sometimes going off the grid for months at a time. Life is hectic, you see, and I’m trying to write a novel. On top of that, we’re in the middle of a pandemic which has messed with all our minds. You can relate, right?

For sure, there are amazing bloggers out in writer land. Some of you compose a blog every couple of weeks. Wonderful, creative ones at that. Many, however, admit to cutting back on blogging to devote more time to serious writing.

And that’s the crux of the matter. When writing must be crammed into meagre fragments of the day, prioritizing is essential. You know this, don’t you?

So why are you expecting me to blog month after month? You aren’t? Perhaps I’m confusing readers with agents and publishers.

Well then, let me just tell you what I’ve decided to do with my current work in progress. I’m going to post it as a serial novel, blogging a segment every-other-week or so.

Serial novels have been around since 1844 with The Count of Monte Cristo by Alexandre Dumas. Other examples include Uncle Tom’s Cabin by Harriet Beecher Stowe (1851), A Tale of Two Cities by Charles Dickens (1859), Anna Karenina by Leo Tolstoy (1875), The Secret Garden by Frances Hodgson Burnett (1910), A Farewell to Arms by Ernest Hemingway (1929), And Then There Were None by Agatha Christie (1939), and Positron by Margaret Atwood (2012-2013).

As you might imagine, posting a serial novel before the story is finished and has gone through several drafts is not without risks. To begin with, one must try to keep the characters in line while keeping their names straight. Criticisms of the form include plot lines not making sense when viewed as a whole. Yikes!

Nonetheless, I see this as a way through my current procrastination. Besides, I’m counting on my Beta Readers and the rest of you to give me the odd nudge in the right direction.

Here then, on this day in May of the year 2020, I am stepping off the precipice with the Preface of Hold Gently the Shadows. 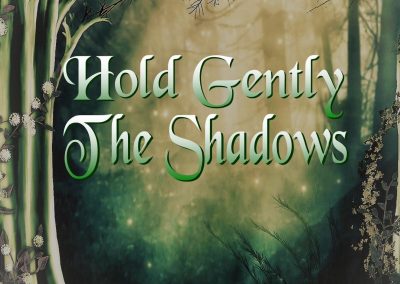 Detail from design by beyondbookcovers.com

Long shadows of evening crept into the forest, heightening her terror. Panting from exertion and fear, she stumbled through the undergrowth, tripping over fallen tree limbs, gasping in alarm when vines grasped her ankles.

Her exhausted, aching body longed for rest, but she pushed onward, knowing she must distance herself from the lodge before they discovered she was gone. When at last she reached a cleared stretch of the Bruce Trail, she allowed herself to lean against a tree to catch her breath.

But her respite was all too brief. A raven landing on an overhead branch startled her with a gurgling croak that rose in pitch and volume. As if in response, a wolf howled from afar and was answered by another.

Panicked that Ravensglen wildlife would reveal her whereabouts before she reached safety, she set off quickly along the trail. With her energy flagging, she rounded a bend and almost collided with a young man accompanied by two large dogs.

“Are you alright, Mrs. Wolfe?” asked the man.

His face registered puzzlement, but he said nothing.

“Back to the lodge?”

“No! To Creekside before they find me.”

“Before who finds you?”

“I’m not sure,” she said, tears springing to her eyes, “but they want my baby.”

His eyes flickered to her rounded belly. “Better come with me so my mom can help,” he said.

It took all of her remaining strength to keep pace with the young man’s loping stride as he retraced his steps in the direction from which he had come. When they left the trail to follow a path through dense bush, he told her they were now on Saugeen First Nations territory, home of the Ojibway.

“They’ll still come after me,” she said, glancing over her shoulder as if she expected to see pursuers at any moment.

“You’re safe with me,” he said. “You mightn’t remember, but I’m Nate. I kept your niece and nephew hidden in the woods while the three of you were waiting to be rescued from Ravensglen the last time.”

“I remember you being younger,” she said after a moment’s consideration.

“Four years ago?” she asked bewildered. “That can’t be.”

Soon they reached a log cabin surrounded by well-tended gardens. Nate’s mother, Karen Greyfoot, outside gathering herbs took one look at the pale, breathless woman and invited her inside.

“Oh, your author name,” said Karen. “Come sit down and put your feet up.”

“First I need to phone the Galvinstons in Creekside to see if they’ve held my apartment for me,” said Carmen.

Karen assisted her in putting through the call, then busied herself making tea. Mavis Galvinston answered her phone on the third ring.

“I’ve waited a long time to hear from you, dear,” said Mavis. “Of course your apartment’s here for you. I’d have held it even if your mother hadn’t covered the rent.”

“Mother did that?” asked Carmen, dissolving in fresh tears.

Mavis told her to hang on while she found someone in the manor to drive north for her. Carmen waited anxiously, listening as her landlady ran up the stairs, cellphone in hand. She could hear Mavis talking to someone, and in the background a young woman’s voice calling out a greeting to her.

“Paola says she’ll leave at once. She’s going to see if Owen can leave the station and accompany her,” said Mavis into the phone. “Where shall they meet you?”

Carmen redirected the query to Karen, who suggested they meet at Kincardine. When the call ended, Carmen followed Karen into the living room, sank into a chair, and gratefully accepted refreshments. She told her host that, thanks to her mother, her apartment at Briarfeldy Manor was still hers.

“I attended your mother’s funeral at St. Mark’s in Coltsfoot,” said Karen.

Karen immediately regretted her words, but unable to retract them, she nodded sympathetically.

“Where was she buried?” asked Carmen.

“It’s my understanding that after the funeral Mass, your mother’s cremated remains were interred in the family plot in London.”

“Was I at the funeral?” asked Carmen.

“You were there with Bartholomew and his sister, Emily. Most of the Ravensglen community were also present.”

“Why can’t I remember anything?” asked Carmen in a whisper. “What happened to my poor mother? Have I really been away from Creekside four years?”

“You’re exhausted,” said Karen. “As soon as you finish your tea and freshen up, you can rest in the car.”

A short time later, Carmen, Karen and Nate left Ojibway territory in Karen’s car and sped past the road leading to the Ravensglen lodge. The women sat in the back and Nate drove. Their destination was Kincardine, not quite the half-way point to Creekside. There Carmen would meet Paola and Owen for the final lap of her journey.

“Are the ones coming for you the same ones I met four years ago?” asked Nate.

“You probably met Detective Owen Whelan then,” said Carmen, “but not Paola Crispo. They both live at Briarfeldy Manor, Paola across from me on the third floor, and Owen in an apartment on the first floor with his son, Colin.”

“Azur lives at Black Springs Abbey,” said Karen. “She and I became good friends at university when we discovered we were both healers. Azur, as you know, Carmen, became a nurse practitioner. I became a physician in your world, a medicine woman in mine.”

Carmen nodded, though she seemed far away. During the drive, Karen was a supportive listener to her bewildered account of fragmented memories. Carmen didn’t know when the baby was due or from whom she was running. She remembered being rescued from Ravensglen previously when a younger version of Nate played a part. She recalled returning to Creekside at that time and moving into a new apartment on the upper floor of Briarfeldy Manor.

She knew she was once known as Dr. Sasha Deleaney, clinical psychologist, and that for a complexity of reasons she’d grown more comfortable living as Carmen Blackmoor, author of psychological thrillers.

“That’s why you caught me off guard on the trail by introducing yourself as Carmen Blackmoor,” said Nate.

“You were nicely discreet about it, Nate,” said Carmen.

“You don’t remember coming back to Ravensglen shortly after you were rescued?” asked Karen.

“No. Were Paisley and Dorrian with me?”

“I don’t believe so. At least, they weren’t ever seen by anyone. And they would have had to attend school, I’d think.”

“I can’t wait to see if they’re alright.”

“Do you remember being married to Bartholomew Wolfe?”

“Bartholomew and I were friends,” said Carmen, “and I recall a strange welcome ceremony preceding the original rescue. The theaghlach were there.”

“Yes, pronounced with more of a guttural sound though. I remember Thol calling them muh ha-eye-lockh, Irish for my family.”

“And is it the theaghlach who want your baby?”