THE SHUSHAN CITADEL: DúndirkaNoka and the Citadel 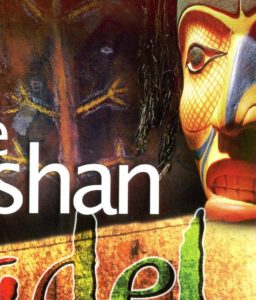 We’ve already visited two of the surviving communities in the pages of The Shushan Citadel, the fortress at Shushan and the island monastery. Let’s take a look then at the third one, the indigenous settlement, DúndirkaNoka.

When the Dragonflies flew over DúndirkaNoka [Doon-dirka-Nōka] a few minutes after leaving the abbey, the pilots observed the peaceful sight of a model First Nations village. And that’s exactly what the village was – at least above ground – a model of Aboriginal life before the white settlers arrived.

From above, the pilots observed an assortment of dwellings encircling a large central manor. At the entrance of the manor’s long lane were two stone bears, one threateningly upright with fierce eyes and an open mouth exposing vicious teeth. The second bear was on all fours, its gaze focused and still, its nose raised searchingly.

The dwellings surrounding the manor included conical birch bark tipis, domed wigwams, and summer lodges, rectangular structures that could house up to fifteen people. Lodge coverings made from moose or deer hides, bark or brush, were arranged over a conical framework of poles. Stacked near the summer lodge were several Algonquian birchbark canoes, lightweight, of shallow draft, and easy to repair. They were designed for portage over difficult terrain and navigation over unexpected rapids.

There were also winter lodges, semi-subterranean, wood framed, earth-covered dwellings capable of providing warmth under the most extreme conditions. Propped against the winter shelter were snowshoes, toboggans, and dogsleds capable of carrying two adults and two children, plus cargo of three hundred pounds. In early times, each hut would have kept a watchdog for warmth and warning.

A horse grazed in an enclosed pasture, ignoring two large shaggy dogs a few yards away, playfully tugging on a gnarly stick. Five half-grown cats wandered aimlessly among the dwellings, occasionally lurching into brief tumbling assaults on one another. The site also had barns, stables and garages.

Commonly called Noka, which means Bear in the Algonquian language, the settlement had been an internationally recognized centre for the preservation of Aboriginal language and culture. Prior to the Desolation, students had come from near and far to spend a week or two living above ground in the wigwam community. Invited medical personnel made annual retreats there to prepare for the initiation ceremonies of first, second, third and fourth order of Midewewin, medicine man or woman.

Within the manor was a central great hall, its pine walls reaching to a lofty ceiling constructed like an inverted canoe. The great hall was surrounded on three sides with service rooms on the lower level and bedrooms on the upper.

Noka’s subterranean centre was accessible only to First Nations people and very few non-natives who had earned honorary membership. Four of these latter were Brother Joachim, Sister Thea, Abbess Brigit, and Brigit’s friend and mentor, the elderly Bishop Theodorus.

Brother Joachim, like White Owl, was a linguist. The monk was fluent in English, Latin, Hebrew, French, Spanish and redspeak, and competent in several or languages including Arabic. Sister Thea, originally from Jamaica, was a physician, well on her way to acquiring the third order of Midewewin. Mother Abbess Brigit was a psychiatrist who, despite her youth, possessed innate wisdom, and was a gifted healer of body and spirit.

Recognizing the potential of having intelligence people in both DúndirkaNoka and Abbey Trádún, the Canadian government had provided intensive training for a few chosen citizens from each community. The government had also funded special communication and security measures that made these two underground centres far more sophisticated and impenetrable than they would otherwise have been. Or that the outside world could imagine.

At precisely 1000 hours, Meres made his weekly space.speak contact with the First Nations settlement.

“Hello, Noka,” he typed. “Meres here. Am I speaking with White Owl?”

“Just great. Did the Shushan Dragonflies disturb you?”

“No doubt you were warned by the abbey.”

“We have our own watch and secure system,” said the Indian evasively.

“But you do communicate with Brother Joachim?” asked Meres.

“Do you interact physically with the abbey?” asked Meres.

“Our cultures and interests are quite different.”

“But do you ever do business with them?” persisted the Omni Development and Protection Corp man.

“Before the comet, our students participated in occasional sports and cultural exhibits,” replied White Owl.

“I’m sure the students benefited from the experience. What tribe do you belong to, White Owl?”

“So Noka is an Ojibwe city?”

“Forgive my ignorance,” said Meres. “Please explain how that is different.”

“Noka is primarily Algonquian, of which Ojibwe is one of several tribes, but we also have a tribe from the Iroquoian family.”

“And what tribe is that?”

“How interesting! Did you know that the General’s wife, Lady Vashti, is Mohawk?”

“I didn’t,” admitted White Owl. “Incidentally, how many people live in Shushan?”

“Twenty-two hundred. That includes men, women and children. And in Noka?”

“One final question before I sign off, if you don’t mind,” typed Meres. “Do you and the abbey communicate via clearspeak?”

“Is there another way?” asked White Owl. To White Owl’s satisfaction, the man from Shushan had just confirmed his attempts, however unsuccessful, to intercept space.speak between DúndirkaNoka and Abbey Trádún. His failure to penetrate was due to a triple precautionary system comprising a secret satellite signal, safe.talk chambers in both abbey and settlement, and the use of redspeak code.